Imagine a time when life was so certain that when you built a building for your business you were confident enough in the future that you put the name of the business into the very fabric of the building.

This is not a time of mergers and takeovers of globalisation and restructure, this is when life was more local and certain.

There are a number of such buildings around and so this blog is an attempt to record some of them and more importantly a bit of the history of the business which by and large are no longer with us.

If you know something about any of these business please add a comment. You can do this without having to sign up for anything and can be anonomous if you prefer. 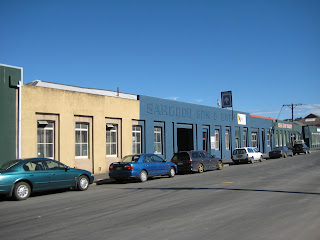 This is 20 - 34 Cresswell Street, Dunedin
Edited Version of Cyclopedia of Wellington Entry to be found here
http://www.nzetc.org/tm/scholarly/tei-Cyc01Cycl-t1-body-d4-d53-d30.html

Founded Originally by Hon. Sir Frederick Thomas Sargood, K.C.M.G., M.L.C. in Melbourne in 1848 as an importer of goods principally from Britain He met and employed John A. Ewen in Melbourne who later become a partner in the firm and was eventually dispatched to Dunedin in 1863 to establish the New Zealand business. By this time Percy Rolfe Sargood, Sir Fredericks son was active in the business and was being groomed to take over the business by holding various positions within the company. Hence the New Zealand name was Sargood, Son and Ewen.

A few years prior to this, Mr. Sargood, the senior partner and founder, had returned to London for the purpose of establishing a buying-house in the world's commercial metropolis.

In 1893 Mr. Percy Rolfe Sargood, the second son of Sir Frederick, was admitted a partner in the firm, taking the management of the Dunedin business. The firm had business in Auckland, Wellington, Christchurch, Invercargill, Napier, New Plymouth, and Wanganui,
If all the warehouses were placed side by side, they would cover an area of about six acres, and the total floorage space would be upwards of 500,000 square feet.

They are also manufacturer on a most extensive scale. Their Dunedin boot factory alone has a ground floor space of 13,000 feet, and gives employment to upwards of 250 hands. No fewer than sixty sewing machines are constantly at work. Messrs. Sargood's boot brand is “Standard,” and every pair turned out has the word “Standard” branded on the heels. Their manufactures gained first awards in every section for boots and shoes at the Dunedin Exhibition of 1889–90.


It is this building, The Boot Factory that we are looking at above I believe.

Eventually upon the death of his father and Mr Ewen Percy became the head of the company, just shortly before his death he placed the shares in the business into a trust which was to aid youth and the arts. This has become known as the Sargood Bequest and there is additional information on their web site here http://www.sargoodbequest.org.nz/prs.html

Bing Harris eventually made and offer to take over the company of Sargood Son & Ewen which resulted in a merged entity Bing Harris Sargood.
Posted by Big Dog Talking at 2:30 PM

Email ThisBlogThis!Share to TwitterShare to FacebookShare to Pinterest
Labels: Sargood Son and Ewen